Over the past 3 years Comic Relief funding has supported targeted work for children & young people who are under increasing pressure from the drinking culture in the Valleys. The project has helped to raise awareness of the dangers of alcohol abuse and enabled our young people to make more informed choices. 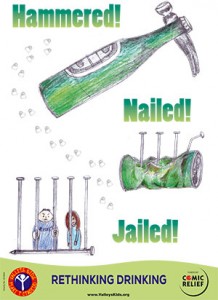 Young Apprentices from British Airways, who had  Climbed Snowdon to raise funds for Comic Relief  attended the conference. They were impressed with the performances and enjoyed having the chance at penalty shoot-outs whilst wearing beer goggles.

‘This shouldn’t have to happen’ film, was made by young people from Valleys Kids in partnership with ProAct UK…

This short film captures the essence of the Rethinking Drinking Conference [yframe url=’https://youtube.com/watch?v=AITBn5me9rU’]