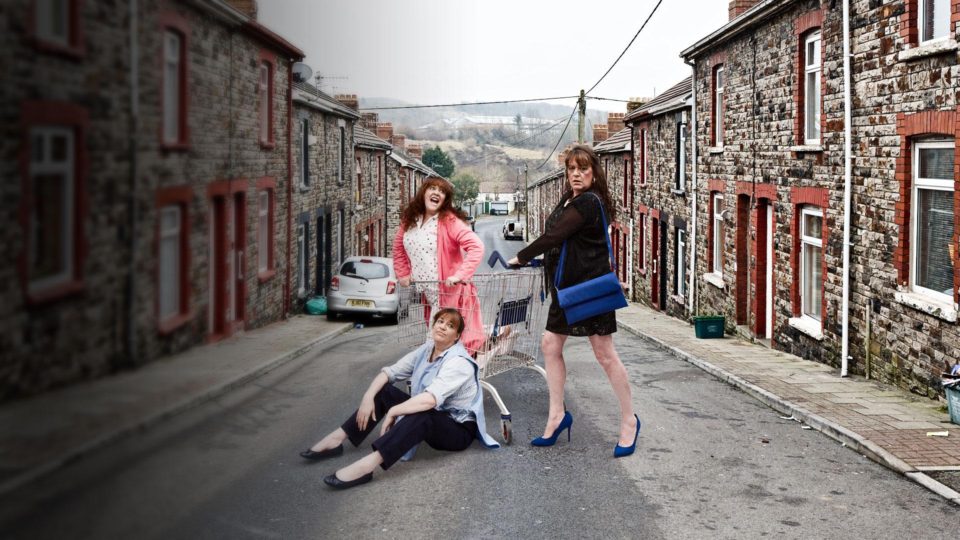 We were invited by National Theatre Wales to attend the first night of Mother Courage. The adaptation of the play is by Ed Thomas, and is being performed at Merthyr Labour Club. The cast is all female, and over 40; we were going to a see new and exiting approach to the play.

We were lead into the main hall space in the club; the seats had been set out in long parallel lines facing each other and most of the action took place in a central isle. Six televisions hung from the walls at the back of each seating area showing footage of war. It seemed at first that we had been taken into a karaoke evening, and several members of the Valleys Kids group didn’t miss the opportunity to have a dance.

Members of the cast moved through and interacted with the audience, whilst Mother Courage herself organised her shopping trolleys.

The story of “Mother Courage and her children” is of a woman who makes her living and survives by buying and selling in war zones. She lives in and does business from her beloved cart.

In this version, set in a non-specific time in history, her cart is represented by the trolleys. The cast play male and female characters and use very bit of the space, wrapping around the audience.

To the further delight of Valleys Kids members, the second half began with a disco; all of the chairs had been moved back, leaving lots of space for dancing.

Members of the group said how much they liked the unpredictability of the play, and that it was very thought provoking. They were completely engaged by the performances and the powerful and beautiful songs that peppered the piece. The unconventional style and casting of the play demonstrated how possible it is to think creatively and openly when developing material for performance.