White Stuff Cardiff selected us as their “Charity of the year” this year again and are currently running a “Footie Selfie Competition”.

Over the summer months, they are aiming to raise an additional £20,000 to support their excellent work by launching a fun fundraising campaign.

It’s called the “footie selfie competition” and they are asking people to pop in to their local WS shop and buy a pair of limited edition flip flops, the proceeds of which go directly to us!!!

We’d love to get as many of our supporters as possible involved!  When you’re next in Cardiff and you need some summer flops, think White Stuff!

Alongside this they also have the option for people to enter the supporting competition  by taking a photo of their feet, uploading it to Instagram or to the White Stuff site for the chance to win a 7 night holiday to Watergate,
including a five course meal at Jamie Oliver’s Fifteen Cornwall, breakfast for four at The Beach Hut and surf lessons at The Extreme Academy.

Here’s my #footieselfie!  Now where’s yours….. 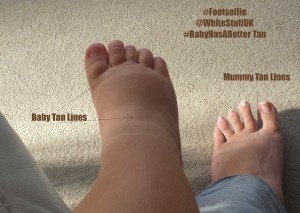